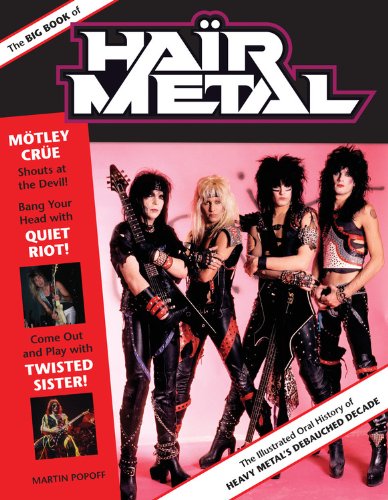 This book is a great addition to your Metal and Music related shelves! Simply the way it looks and the way it feels make it a really nice jewel to own. It is indeed a big book with solid hard cover and 224 high quality pages of full color illustrations. All your vintage and not-so-vintage album covers, posters, flyers, concert tickets, newspaper cuts etc are here to remind you of the “history of Heavy Metal’s Debauched Decade”!

Everybody knows Martin. Not only because he is truly “the world’s most famous Heavy Metal Journalist” and writer (I should add) but because he has contributed to the literature of Heavy Metal more than anyone else ever. And he does that in a very nice way. Never goes too Academic, pours in essential doses of humor and always brings in the voices of the musicians involved.

Although we never met (mind you we live in different continents) we have been in touch several times in the past due to both us working in the Music industry. Actually the first time was some 16 years ago for a book review of his very first edition of “The Collector’s Guide To Heavy Metal”. That was (and still is to a certain extent) an excellent resource for Metal collectors taking into account that the internet was just a newborn baby and resources were rather limited.

Fast forward to 2013-2014. I found myself to enjoy more than usual the sounds of Hair Metal bands. I thought “what’s going on? Damn I am getting old!” Don’t get me wrong. I always liked Hair Metal but it never was my cup of tea. I was always much more into other Metal styles. What happened now? Should I care? No! I should enjoy the Metal that makes me happy! As Martin puts it “..It’s a mood lifter for any occasion”. So I started to dig some of my old Hair/Glam/Sleaze records and enjoy them under ‘different ears’. Then I was looking to discover more bands from the era, especially bands no one else ever heard of. Then I said, ok let’s also make a website to gather Hair Metal videos, news and stuff from all around so here is hair-metal.com 😉

So I am in the middle of my Hair Metal crisis and all of the sudden this book comes in! Martin, isn’t it funny how people’s lives kinda link to each other?

Ok I will take out all my bias and tell you what to expect from this printed jewel. I want to highlight the fact that this is a work of the highest standards. It only consists of colored pages and there are tons of photos and scans on every single one. The layout has been set in such ways that you don’t get bored or tired reading… you just carry on. Every page looks different to each other and there are small bits of trivia all over the place.

As far as the content goes, it starts from the 1950s and 1960s. Martin argues that Hair Metal has a “…long and complicated prehistory…” and up to page 11 he points out some links that can certainly justify some connections. Then comes the 1970s where things come up more visible as to what will follow in the 1980s. The 1970s had Led Zeppelin, Alice Cooper, T-Rex, Kiss (of course), Aerosmith, Van Halen and many more who were the idols of the Hair Metal bands of the 1980s.

And then comes the main bulk of the book which is the Golden Age of the 1980s. Each year has its own long chapter of events mainly album releases. Now, throughout the book what you are reading are parts from interviews and chats Martin had over the years with band members and people from the Music industry. This is actually quite interesting because you get to hear the stories from those who actually lived it. For example you will find firsthand from Sammy Hagar how the riff from “Why Can’t This Be Love” came to be. You will read the words of Duff McKagan (Guns ’n’ Roses) about the recording of “Appetite For Destruction” and also Dee Snider on Twister Sister’s experience at Jimmy Page’s studio. And many, many, many more.

My only criticism is that I would like to read more of Martin’s own thoughts and findings on the phenomenon. Every chapter starts with him defining a framework of what happened in the year at hand. Very informative but personally I would love to read more of it. Also there is a cutoff point with the release of Nirvana’s “Nevermind” in 1991. For me Hair Metal never actually died. It went out of the mainstream press, radio and MTV but there have been numerous bands in both sides of the Atlantic ever since. But I guess the book has a focus on the decade of the 1980s so I would expect from Martin a Vol.II on Hair Metal in the 1990s and beyond. Is that right?

Overall, you need to buy this book… yesterday! Especially if you were there this book is such a nice trip down the memory line.

Recommended ways to read it: Beer, smoke, lipstick [joking about this ok?], and as you go through each year spin a record or a CD from that year… and play it loud mutha!

Buy it from Amazon