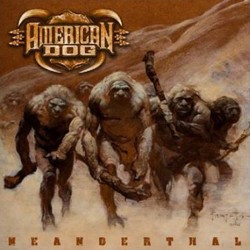 The artwork for American Dog’s upcoming seventh studio album ‘Neanderthal’ will be a painting by the late, great fantasy and science fiction artist, Frank Frazetta. The painting, also called Neanderthal, was created in 1967 and first appeared that summer on the cover of the infamous horror-comic magazine, Creepy — Issue #15.

Other notable recording artists who have used Frazetta’s paintings as cover art for their albums include Herman’s Hermits, Molly Hatchet, Nazareth, Yngwie Malmsteen, and Wolfmother.

Neanderthal, the follow-up to 2012’s ‘Poison Smile’, is tentatively scheduled for release in mid to late June.

The band recently released a now sold-out limited edition four song single containing the songs “Who’s She Killing” and “We Ain’t Not Gonna Get Drunk Tonight”. “The CD (single) contains three different versions of the single “Who’s She Killing Now” (different edits for radio play) with a B-Side of “We Ain’t Gonna Not Get Drunk Tonight” and it comes with a bottle opener so you can play along at home,” said American Dog frontman Michael Hannon.

The band’s sound is a very coarse high energy hard rock with a blues base which is often compared to ’70s era Ted Nugent with the power and grit of Motorhead. Although the band appeals to a wide demographic, American Dog is especially popular with the biker set. They’ve played some of the biggest biker events in the world, including Sturgis and many Easyrider events in the States, the Hamburg Harley Days Event in Germany, and the Rock and Blues Custom Show in England. They are also popular in the ‘rust-belt’ where they play to enthusiastic crowds in such cities as Columbus, Cleveland, Pittsburgh, Milwaukee, Chicago, Indianapolis, and Louisville. They have shared the stage with Ted Nugent, David Allan Coe, UFO, Rose Tattoo, Billy Idol, Nazareth, Ratt, Ace Frehley, .38 Special and Molly Hatchet.

American Dog have numerous European tours under their belts and have enjoyed tremendous success in Germany, France, Holland, England, Switzerland, Spain and Belgium. With over 35,000 CDs sold and countless gigs played the American Dog attack shows no signs of slowing.