Crash Kelly are back with their first single (“Touch Me”) in ten years and the release of a lyric video for it.

Crash Kelly‘s sound is best described as 70’s Glam Rock on the early 80’s Sunset Strip… T-Rex and Mott The Hoople by way of Mötley Crüe and Hanoi Rocks, with more than a fair dose of Alice Cooper, Cheap Trick and Thin Lizzy thrown in for proper effect.

Initially active between 2002 – 2009, Crash Kelly released two critically acclaimed cult classics, ‘Penny Pills‘ and ‘Electric Satisfaction‘ via Century Media’s rock n roll imprint Liquor and Poker Music, followed by a third album, ‘One More Heart Attack‘ via Opening Day/Universal Music. All three albums were released in Japan via Spiritual Beast/Universal, and a European “Best Of” compilation, ‘Love You Electric‘, was released via the Bad Reputation, earning the band an 8/10 full page review in Classic Rock Magazine. The band toured North America as support for Alice Cooper on his 2006 Dirty Diamonds tour, and also toured the US alongside Century Media label mates Backyard Babies. Crash Kelly also toured the UK and Europe alongside The Quireboys and Enuff Z’Nuff, and in their native Canada as support to ex-Guns N’ Roses guitarist Gilby Clarke (who also produced ‘Electric Satisfaction‘ and ‘One More Heart Attack‘ in his Los Angeles based Redrum Studios).

The decade that Sean spent away from Crash Kelly saw him become a highly in demand guitarist, songwriter, producer and collaborator. He has toured the world and recorded with a number of multi platinum acts including Nelly Furtado, Helix, Lee Aaron, Coney Hatch, Honeymoon Suite, Gilby Clarke, Alan Frew (Glass Tiger) Carole Pope/Rough Trade, Harlequin, Trapper, Howie D, Doc Walker and many more. He has recorded four classical guitar albums, two of which charted in the US Billboard Top 10. In 2015, Sean was cast to star alongside Twisted Sister lead singer Dee Snider and Taylor Dayne in Dee Snider’s Rock N Roll Christmas Tale, which ran during the Holiday Season at Toronto’s famed Winter Garden Theatre and played to over 20,000 people.

Sean is also the author of the Amazon chart-topping book Metal On Ice: Tales from Canada’s Hard Rock and Heavy Metal Heroes (Dundurn Press), and is a sought after guitar clinician and music educator. He currently teaches Music with the Toronto Catholic District School Board.

With the new single “Touch Me”, Sean returns to his glam rocking roots. Musical support comes from Dave Reimer on bass and Tim Timleck on drums. This is the first release for Canadian Shield Music, a new imprint formed by Kelly and Gryner to bring 70s and 80s influenced hard rock to a very specific audience who longs for the days of glossy rock magazines, fully stocked record store shelves, loud guitars and big hooks.” 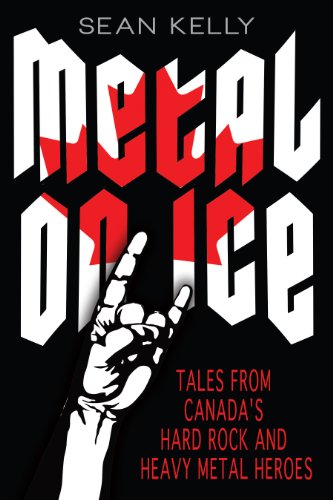